When an interest-bearing bond is sold before maturity or bought at a price higher or lower than its face value, a capital gain (or loss) will occur at the time the bond is sold (or matures).  Therefore, the adjusted cost base of a bond must be tracked.

When you purchase a bond after its issue date, only the price of the bond and the commission are added to the ACB.  This is less than the total amount paid because it does not include the accrued interest.  As an example, let’s use the following quote for the purchase of $100,000 par value of HSBC BANK CANADA 2.938% 2020/01/14 bonds: 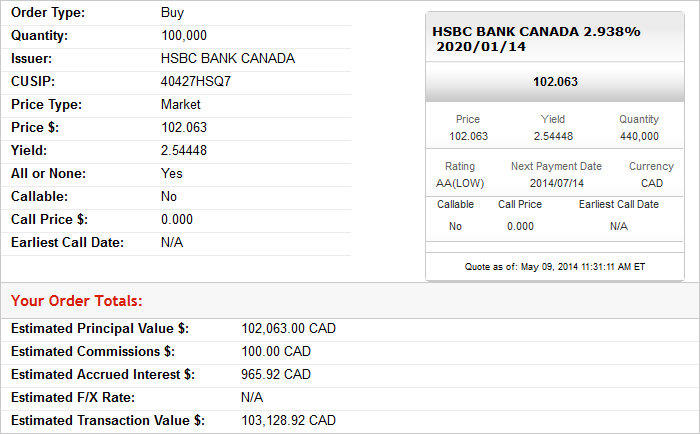 Note that the bond is trading at a premium because the price is greater than the par value.  The price is $102,063.00 and the commission is $100.00.  Also, there is $965.92 of accrued interest to be paid to the seller, representing the interest accrued from January 14, 2014 (the date of the last interest payment) to May 9, 2014.  This accrued interest would be deducted from the interest payment you receive on July 14, 2014 when calculating your net interest income for 2014.

When calculating the ACB, only the price and commission are considered, without the accrued interest portion of the payment.  The initial ACB is therefore equal to:

AdjustedCostBase.ca can be used for calculating ACB and capital gains for interest-bearing bonds.  This can be accomplished using “Buy” and “Sell” transactions.  The “Buy” transaction on May 9, 2014 would be entered as follows:

Bonds are generally sold and quoted in units of $100 so the transaction is shown as the purchase of 1000 units for $102.063 each.  But the transaction could also be shown as the purchase of 100,000 units for a price of $1.02063, as long as you’re consistent with using the same unit amount for all transactions.  Note that the commission of $100 is included, but the accrued interest payment is not, as it has no affect on ACB.

Similarly, the sell transaction would be entered as follows:

Once again, the accrued interest received is not entered because it does not affect the ACB or capital gains.  The transaction summary is shown below, with a capital gain of $2,253.00:

5 thoughts on “Taxation and Adjusted Cost Base for Bonds”