When you own exchange traded funds (ETF’s), trusts, or other kinds of publicly traded funds, your brokerage should provide with a T3 slip every year showing the tax breakdown of the distributions that were paid out.  The information contained on the T3 slip is vital for completing your tax return as well as for updating your adjusted cost base balances.

However, it may not always be prudent or rely on your brokerage to send you this information for the following reasons:

A solution to these issues is to access an online service provided by CDS Innovations Inc.  They provide the tax breakdown of all Canadian public mutual funds and limited partnerships.  This includes all ETF’s and income trusts.  The data is provided in the form of Excel spreadsheets that list the breakdown of the distributions per unit.  By using this service you’ll usually be able to access the information sooner (most funds/trusts will release their tax breakdown information before the end of February) and ensure that everything is accurately recorded.

Tax breakdowns are usually provided by ETF providers and trusts on their web sites.  However, this information can be difficult and cumbersome to track down.  CDS Innovations Inc. provides everything in one place.

The tax breakdown service from CDS Innovations Inc. can be accessed here: 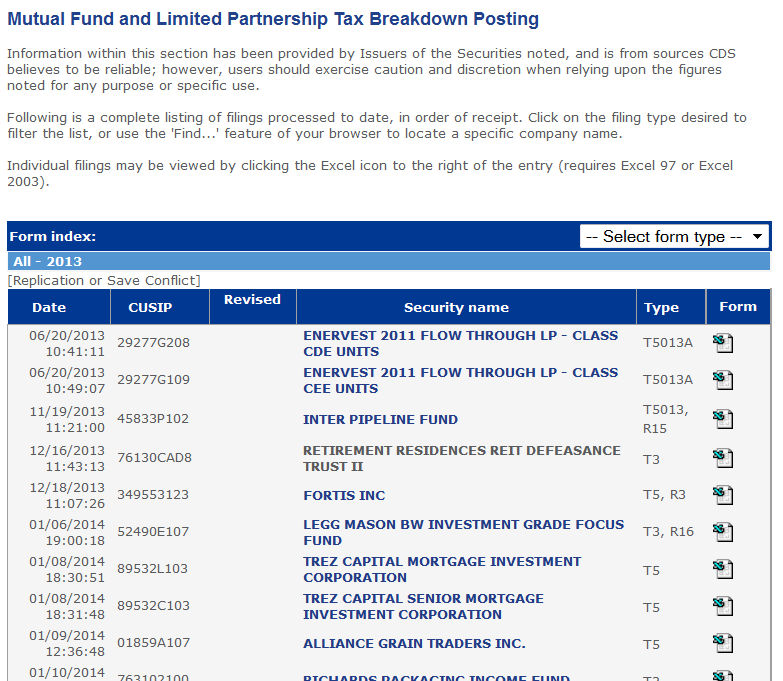 Unfortunately the securities are not listed by ticker symbol so it can sometimes be hard to find the one you’re looking for.  To access the data click on the Microsoft Excel file icon in the “Form” column.

As an example, let’s look at the T3 tax form for XDV (“ISHARES DOW JONES CANADA SELECT DIVIDEND INDEX FUND”) for 2013.  When you first open it up in Microsoft Excel, you may see the following warning about enabling macros:

You will need to click on the “Enable Content” button to enable macros (the file is from a trusted source).  After macros are enabled you should see the following:

This forms shows the tax breakdown of the distributions for XDV for 2013 broken down for each distribution.  Many of the rows, such as Actual Amount of Eligible Dividends (49) and Foreign Business Income (24) are immediately taxable for the current year and must be reported on your tax return.

The following rows are relevant towards tracking your ACB and reporting capital gains:

The “Total Non Cash Distribution ($) Per Unit” is a distribution that has not been distributed as a cash dividend.  Rather, it has been reinvested in the fund.  This is also known as a “Reinvested Capital Gains Distribution” or a “Phantom Distribution” (since the funds are reinvested but the unitholders do not receive any additional units).  These amounts should be added to your ACB.  Since this type of distribution results in an increase in ACB, it has the effect of reducing your capital gain when the units are eventually sold.  So if you ignore these distributions, you’ll end up paying more capital gains tax than you need to.  The amount is shown as a per unit value, so you’ll need to multiply it by the number of units you own.  Non cash distributions are often paired with a capital gains distribution of equal value.

The distributions for the year are each listed separately.  For the case of XDV in 2013, there were 12 monthly distributions.  If you made no purchases or sales of XDV for the year (i.e., the number of units owned as constant throughout the year) you can simply sum up the total annual amounts for each row.  Otherwise, you should calculate each month separately.  Pay close attention to the “Record Date” row for each distribution.  Each distribution applies to a unit if and only if the unit was owned on the “Record Date.” 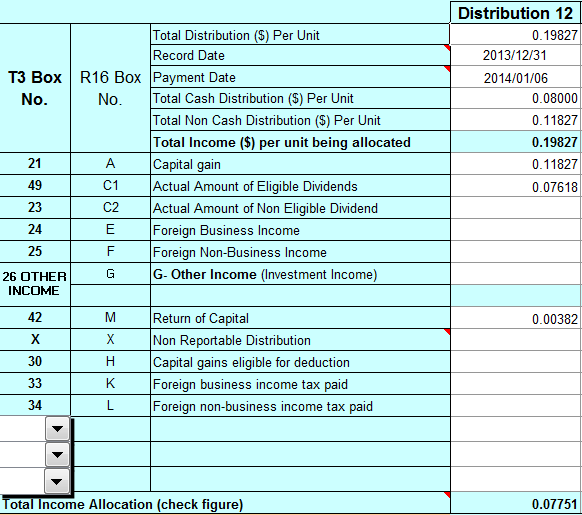 In this case the distribution contains a capital gain and an eligible dividend distribution.  These would appear on the T3 slip you receive from your brokerage and would be included in your tax return for the current year.  The distribution also has a non cash component and a return of capital component.

The “Total Non Cash Distribution ($) Per Unit”  and “Capital gain” components can be entered jointly as a “Reinvested Capital Gains Distribution” transaction as follows:

Since no new units were issued, enter 0 for the “Additional Shares Purchased/Received” field.  The distribution amount is specified as $0.11827 as shown on the T3 form from CDSInnovations.ca.  This has the affect of increasing the total ACB by:

The amount is entered as $0.00382 per share as shown on the T3 form.  This has the affect of decreasing the total ACB by:

You must also account for the other 11 transactions for the year, although the rest of the transactions do not have a non-cash or capital gain component.

Let’s assume that the following purchases were made for XDV:

The complete list of transactions for XDV for 2013 would appear on AdjustedCostBase.ca as follows after entering all 12 distributions:

30 thoughts on “Tax Breakdown Service for ETF’s and Trusts from CDSInnovations.ca”